On Monday 9 June the Oxford Centre for Islamic Studies hosted a visit by HE Mr Nassir Abdul Aziz Al-Nasser, the United Nations Secretary General’s High Representative for the Alliance of Civilisations (AOC). This was his second visit to speak at the Centre as he lectured in Oxford at the Centre’s invitation on 1 March 2012 in his then capacity as President Roundtable with UN High Representative for the Alliance of Civilisations of the United Nations General Assembly. During his visit, the High Representative addressed an attentive audience on the activities and priorities of the AOC and invited views on the way forward for its mission of encouraging international cooperation and dialogue and promoting mutual respect. The High Representative was then entertained to a dinner at the Centre, at which discussion continued. The visit was also the occasion for the signature of a Memorandum of Understanding between the Alliance of Civilisations and the Oxford Centre for Islamic Studies, which provides the basis for a range of cooperation in the years ahead in pursuit of shared objectives, especially in the educational sphere. 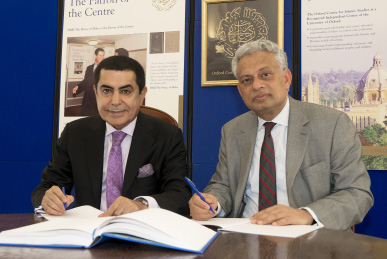