The Atlas Project is a major programme of research into the history and geographical spread of social and intellectual movements in the Islamic world. It will provide a comprehensive multivolume Historical Atlas of the Islamic World. The Leverhulme Trust (UK) the Andrew W. Mellon Foundation (USA) and the Carnegie Corporation of New York (USA) have supported this project.

There are significant gaps in our knowledge of how ideas and individuals moved within and between differently configured Muslim societies, how they interacted with and influenced local attitudes and customs, how they responded to changes in economic and political conditions, the scholarly and religious movements they inspired and their enduring legacy in contemporary times. The Atlas collects and analyses information about Muslim communities and their networks of interconnection in the density relevant to particular localities as they have adjusted over time to variations in the political and economic environment.

The material to be displayed in the Atlas as maps, charts and tables is not of merely academic interest. Our understanding of the contemporary Muslim world needs to be adequately nuanced by a better grasp of the interplay of ideas and experiences that give that world its distinctive identity, which is nevertheless expressed, even in the same region and the same languages, very differently in terms of perceptions, preferences and aspirations. The Atlas Project as a whole envisages coverage of the entire Muslim world divided into five regions with, in terms of published output, one volume for each under the direction of its overall editor. Dr Farhan Nizami has been responsible for the project to create the volume on the South Asia region.

Volume I (South Asia) describes the arrival of Islam in the region through trade and military incursions and the eventual establishment of enduring Muslim polities such as the Delhi Sultanate and the Mughal Empire. The main focus is on the diffusion of Muslim thought and practice through the villages, towns and cities of the Subcontinent. This entails a detailed presentation, for the whole region, of intellectual genealogies comprehensively mapped for different Sufi orders and for madrasa scholars. The maps and charts visualise the interconnected networks of transmission of ideas, texts and practices over the centuries and are explained by accompanying text. In collecting, processing and presenting the material, South Asia will provide a good template for subsequent volumes.

The Atlas is to be published by Oxford University Press (New York).

Click to view the Centre’s 2018 Annual Report entry on the Atlas Project. 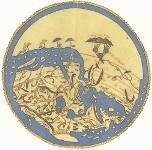