HE Dato' Seri Dr Ahmad Zahid Hamidi, the Deputy Prime Minister of Malaysia, visited the Centre and delivered a well attended lecture on Wednesday 9th November 2016. He took as his title ‘De-Rooting Radicalism and Extremism’. Noting Malaysia’s traditions of multi-culturalism and cooperation between different ethnic and faith communities to the benefit of all, he surveyed the challenges posed by extremists threats, whatever their source. He argued that a sophisticated and coordinated response was required. Attributing blame to entire communities was to be avoided as it would merely play into the extremists’ hands. An effective approach needed to tackle social and other grievances, as well as emphasising the benefits of tolerance and moderation, based on a true reading of faith and tradition.

The lecture was delivered in the recently completed Malaysia Auditorium in the Centre’s new building on Marston Road. The Vote of Thanks was given by Professor Sir David Clary, President of Magdalen College and a Trustee of the Centre. The Director hosted a dinner in honour of the Deputy Prime Minister in the Oman Hall following the lecture. 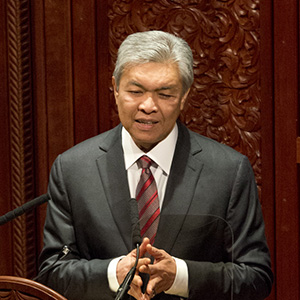