Dialogue in Action: the Witness of St Francis of Assisi

On 27 February, Cardinal Vincent Nichols, the Archbishop of Westminster, gave a lecture at the Centre on ‘Dialogue in Action: The Witness of St Francis of Assisi’. The Rt Hon the Lord Patten of Barnes CH, Chancellor of the University of Oxford, presided and made introductory and closing remarks. The lecture was attended by senior members of the University, faith leaders from across the country, and members of the local community.

The visit follows on from the Director’s trip to Rome for an audience with His Holiness Pope Francis last year and forms part of the Centre’s interfaith dialogue with academic institutions and faith-based organisations.

In his lecture, Cardinal Nichols sought to draw lessons from the experience of St Francis and apply them to some of the challenges of today stressing the importance of listening, mutual respect and understanding between religions. Describing the ‘dialogue of experience’ as essential, the Cardinal revealed that his own dialogue with Muslim leaders had been based on a shared experience of being a religious minority in society. The Cardinal thanked the Director for the invitation to speak at the Centre, later referring to an increasing recognition that education was an important pathway by which all faiths make a contribution to wider society. 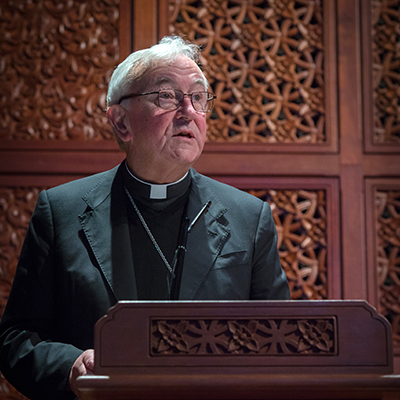