Russia and the Muslim World: Through the Lens of Shared Islamic Identities
Conference

An international online conference on

Russia and the Muslim world: Through the Lens of Shared Islamic Identities

The conference will explore Russia’s diplomatic relations with the Muslim world as they have evolved during the last 20 years. This period corresponds to the leadership of President Vladimir Putin, whose policies for establishing a multipolar world system, together with efforts to establish Russia as a greater world power, have affected Moscow’s close cooperation with the Islamic world. Over the last 20 years, the world has witnessed the ‘returned’ presence of Moscow’s influence in global power relations, with its fostering of Russian interests in the Middle East and North Africa, boosting of relations with South Asia, and maintenance of Russia’s continued status as a global power for the Central Asian states.

Russian Muslims, numbering almost 20 million, are central to the Kremlin’s mechanisms for such collaborations, especially within and through its Muslim regions (such as Chechnya, Dagestan, Ingushetia, Tatarstan, and Bashkortostan). Empowered by the Kremlin, Muslim regions of Russia play an important diplomatic role, such as through the Group of the Strategic Vision ‘Russia-Islamic world’. Relying on shared Islamic identities, Russian Muslim regions have developed diplomatic relations with their counterparts in other Muslim nations and with some key Muslim population centres. These ties include cultural, religious, economic and educational collaborations. Importantly, leaders of the Muslim regions of Chechnya and Tatarstan, who represent the North-Caucasus and Tatar-Bashkir Muslim-populated areas of Russia, have served as key ‘diplomats’ for defending Russian positions in the Muslim world. At the same time they have diversified their republics’ foreign relations, and increased their status in the Muslim world. Without these regions serving as a ‘bridge’, relations between Russia and the Islamic world would probably have been more limited, and it is important to understand the complex roles they have created for themselves in these interactions.

While most scholarly engagement acknowledges Moscow’s  increasing role on the global stage, the bridging function performed by Russia’s Muslim regions has been largely overlooked. This is the primary motivation for the conference.

The first day of the conference will look at Moscow’s relations with the Islamic world – including nations with Muslim-populated areas of the Middle East, North Africa, South Asia and Central Asia; the second day of the conference will focus on the Russian Muslim regions’ engagements with the wider Islamic world, demonstrating how different areas cultivate diplomatic relations between power centres, often using Islam as a common ground. Meanwhile the regions have the ability to seek their own connections and advantages distinct from the directives of Moscow. These complex negotiations are important for a full understanding of the development of Russia’s global relations.

Due to COVID-19 restrictions, the conference will take place online, inviting well-established academics from Russia, the US, the UK, and Europe to present their papers virtually.  The conference is convened by Dr Diana Galeeva, a Scholar-in-Residence at the Oxford Centre for Islamic Studies, and is hosted by the Oxford Centre for Islamic Studies.

Registration for the conference is required and conference places are limited.

In the meantime if you have any enquiries, please e-mail the convenor, Dr Diana Galeeva, at: diana.galeeva@oxcis.ac.uk 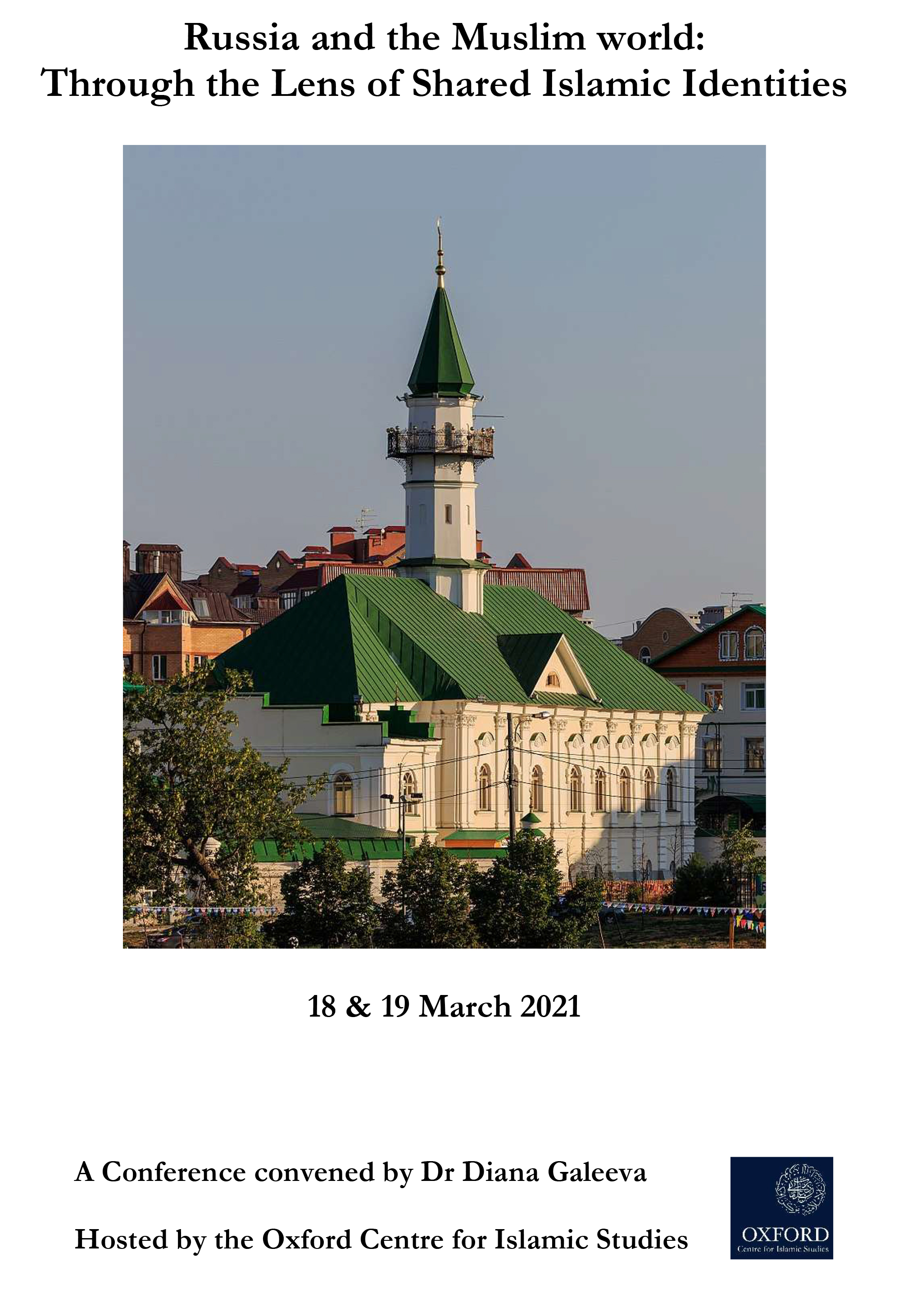