In addressing the current Arab situation and prospects for the future, the Prime Minister began by recalling the momentous events that had taken place since he last spoke at Oxford a decade before, as a guest of the Centre. He described these political, social, and economic upheavals as creating a ‘stormy transformation’ that drove demands for reform.

His Excellency then examined Qatar’s role in mediating peaceful solutions within the region, and stated that establishing democracy alone was not sufficient unless it was underpinned by financial, social, and educational development projects. He announced the creation of a Middle East Development Bank to support Arab states in their transition towards democracy, and to aid economic diversity and youth employment.

The Prime Minister took questions from the audience, after which the Vice-Chancellor of Oxford University, Professor Andrew Hamilton, offered the vote of thanks. Before his lecture the Prime Minister and his delegation toured the Centre’s new building.

A reception was held in the Divinity School, followed by dinner at Exeter College. Members of Parliament, the diplomatic corps, and senior members of the University were in attendance. 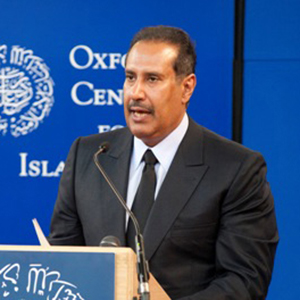