On 25 January 2018, The Rt Hon the Baroness Hale of Richmond, President of the Supreme Court, delivered the Sultan Azlan Shah lecture at the Centre on the  subject of  ‘Religious Dress’. Citing cases arising from the workplace and educational institutions, in both the UK and Europe, she gave an engaging and detailed account of the legal complexities of protecting a person’s right to wear what they personally consider to be appropriate religious dress, or symbols, while also protecting the rights of others.  In many cases headscarves, turbans and Christian symbols, such as wearing a cross, could be readily accommodated with a degree of flexibility on all sides (although in some European jurisdictions a political principle of secularism was argued to be overriding).

Greater complexities came when an individual regarded a full face covering as appropriate in all circumstances, including for example in a court of law.  Questions then arose as to the ability of judge, jury or indeed counsel to judge with the normal accuracy whether a defendant or witness was reliable, in the absence of facial expression and the wider ability to judge body language.  In this respect issues of fairness could be argued both on behalf of the rights of  the individual choosing to be covered, and those whose case was being judged, arguably in circumstances of less than usual transparency.

The lecture drew a large audience of faculty and students and was followed by a varied and lively discussion during the question and answer session.  Giving the vote of thanks (and participating in the Q&A session on stage) was one of  Baroness Hale’s predecessors as President, The Rt Hon. the Lord Phillips of Worth Matravers KG,  Sultan Azlan Shah Fellow at the Centre.

Please find here the full transcript of the lecture. 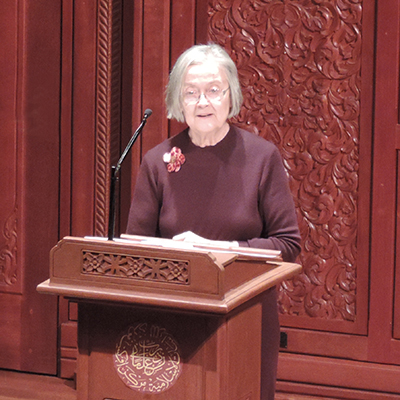