The Islamic World, Democracy, and Development

The President of the Republic of Turkey, HE Mr Abdullah Gül, was the Centre’s Distinguished Visiting Lecturer in Michaelmas term. His Excellency delivered a lecture on ‘The Islamic World, Democracy, and Development’ to a capacity audience in the Examination Schools, Oxford. President Gül stated that it was necessary to break the Islamic world’s current ‘deep-rooted alienation’ from democracy and development, which existed despite what he termed ‘the true credentials of Islamic tradition’ in precisely those areas. Today democracy, human rights, good governance, and accountability were, he said, no longer a luxury but a necessity for globalization. ‘We must aim at finding common ground’, he concluded. In initiating dialogue with those of different faiths, ‘we may easily find that some of what we hear actually is already within us.’

President Gül then answered questions from the audience on a wide range of topics, including the possibility of Turkey hosting talks with Iran in order to move towards a diplomatic solution to the dispute over Tehran’s nuclear programme. As world power shifts eastwards, he said, the EU would find a growing necessity to admit Turkey as a member-state, owing to its strategic geographic and economic position between Europe and Asia. Following the lecture, the Centre hosted a dinner in the President’s honour at Rhodes House. It was attended by members of Parliament and the diplomatic corps, Heads of House, and other senior members of the University. 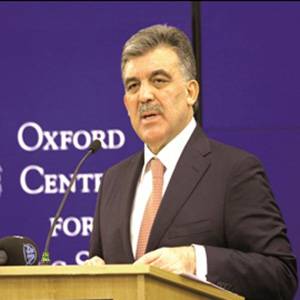