The Political Economy of Climate Change: Challenges for Muslim Societies and the World

On 22 October the inaugural Keith Griffin Lecture was given by Professor James Boyce, Director of the Programme on Development, Peacebuilding and the Environment at the University of Massachusetts, Amherst.  The Griffin Lecture has been instituted to honour the contribution of Professor Keith Griffin, an eminent economist and President Emeritus of Magdalen College, who served on the Board of Trustees of the Oxford Centre for Islamic Studies for more than thirty years.

Professor Boyce took as his title The Development Economics of Climate Change: Challenges for Muslim Countries and the World and set out to identify the winners and losers from the fossil-fuel economy of today and those who would benefit or lose out from the clean energy economy of the future, with a particular focus on Muslim populations and countries worldwide.

Consumers had benefitted from the cheap availability of energy, the production industry had generated large profits and those, mainly state, actors who controlled access to the raw materials had also received substantial rents.  But not all had benefitted equally, between and within countries; 60% of all emissions were generated by the US, China, Russia, Germany, UK and Japan. The losers had suffered increasing pollution and ill health and even premature death.  Again these losses were not equally shared with the poor and disadvantaged suffering disproportionately.

Future policy needed to move current beneficiaries away from reliance on fossil fuels to become, as far as possible, beneficiaries of the clean energy economy and he examined a number of fiscal measures that could be employed to achieve this.  Fossil fuels had enabled great economic growth and some of this wealth needed to be invested in creating a clean energy economy for the future.  This would bring public health benefits and create jobs.  But above all its was a moral obligation to future generations.  Even relatively modest rises in global temperatures would take humankind into unknown territory involving rising sea levels, desertification and perhaps other unforeseen threats.

The vote of thanks was proposed by Professor Christopher Adam, Director of the Department of Development Economics at the University of Oxford. 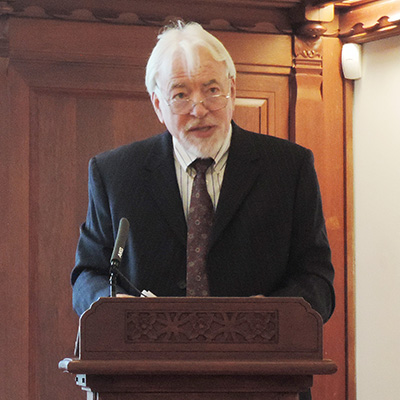