Unity not Uniformity: the Politics of Modern India

HE Mr Salman Khurshid, Indian Minister of Law, Justice and Minority Affairs, India, delivered a lecture on 11 October 2012 on “Unity not Uniformity: the Politics of Modern India” in the Examination Schools. He spoke about the development of India’s institutions and political economy since independence and the role of law in mediating between different interest groups and protecting the rights of minorities. He also participated in reading from, and discussion of, his play “Sons of Babur” at a special event hosted by the Centre and moderated by the Provost of Worcester, Professor Jonathan Bate. 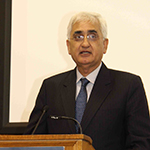