The Indian Story: Past, Present and Future

In the first lecture of the academic year, the Centre hosted the High Comissior of India, Mr Y K Sinha, as part of the India's 70th Anniversary celebrations. Speaking on "The Indian Story: Past, present and Future", His Excellency spoke of the challenges that had faced India since 1947 and the potential of the country as it entered a new stage of social and technological development. The lecture, attended by Oxford academics, students and many new Centre Visiting Fellows, was followed by a dinner in His Excellency's honour which was also attended by Mrs Girija Sinha. 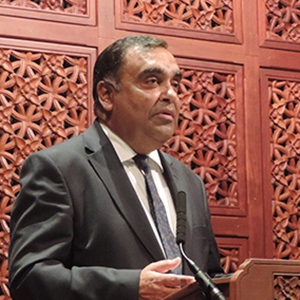 HE Mr Y K Sinha, The High Commissioner of India